By Katelyn Caralle, US Political Journalist for Dailymail.com

Jill Biden arrived in Michigan on Sunday to attend an event with the Saginaw Chippewa Indian Tribe to discuss youth mental health.

“I am a teacher, so I look forward to what the kids have to say,” Dr Biden said in a brief opening remarks during the listening session.

She added that she can sympathize with the difficulties of returning to school during the pandemic.

Jill wore a green sweater and skirt set which she last wore in her Vogue article.

The first lady’s procession arrived at the Ziibiwing Center in Mt. Pleasant, Michigan on Sunday afternoon where she was greeted by members of the tribe as well as representatives of the Advancing Wellness and Resilience in Education (AWARE) project, which is an initiative focused on the mental health of middle and high school students. 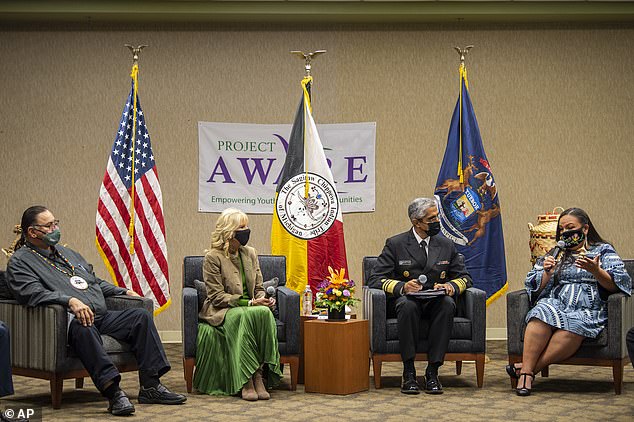 Dr Biden, an educator, participated in a session with tribal members and representatives of the Advancing Wellness and Resilience in Education (AWARE) project, moderated by Surgeon General Vivek Murthy (second from right) 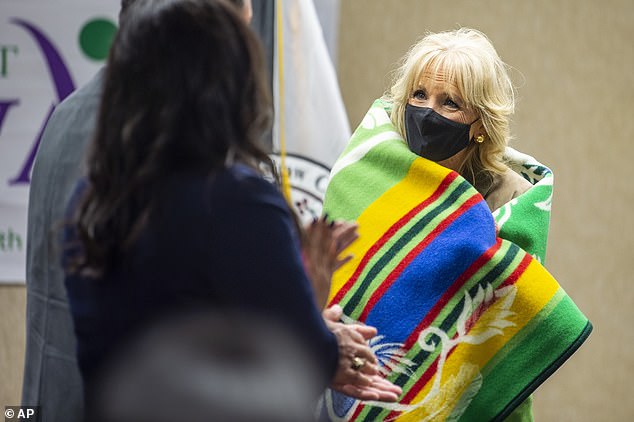 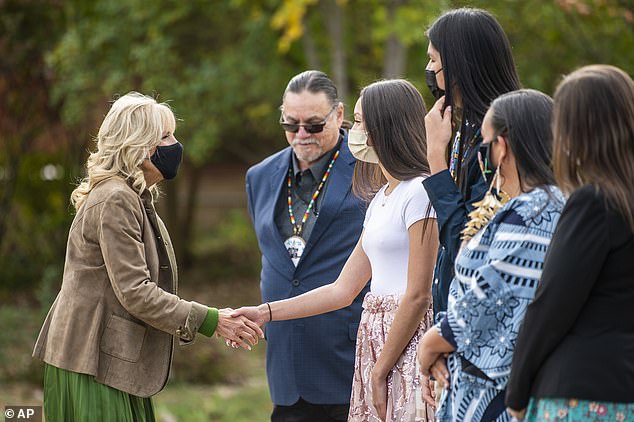 There were also a few children aged 7-9 who were there to weigh in from the student’s perspective.

Surgeon General Vivek Murthy accompanied Dr Biden, who is a teacher, on his trip and he moderated the session.

A group of about a dozen members of the Chippewa tribe greeted the first lady by performing a traditional greeting ceremony that included dancing, singing and drumming.

After the session, Jill will attend and speak at the annual Yeshiva Beth Yehudah dinner in Detroit.

While Dr Biden was on a trip to Michigan, President Joe Biden was spending his Sunday at their home in Wilmington, Delaware, where he hosted Democratic Senators Chuck Schumer and Joe Manchin to discuss budget negotiations. 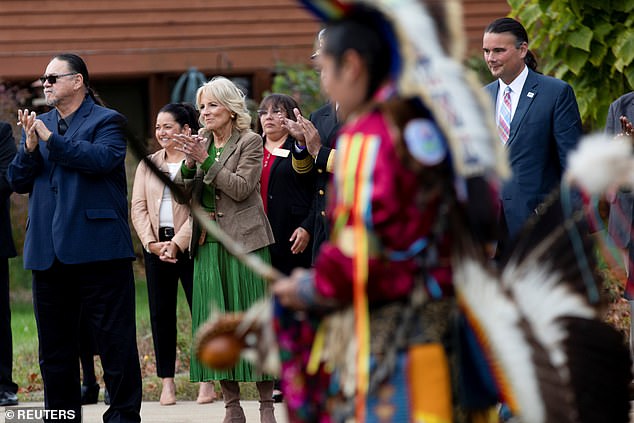 Jill was greeted by a dozen members of the Chippewa tribe who performed a traditional greeting ceremony that included dancing, singing and drumming. 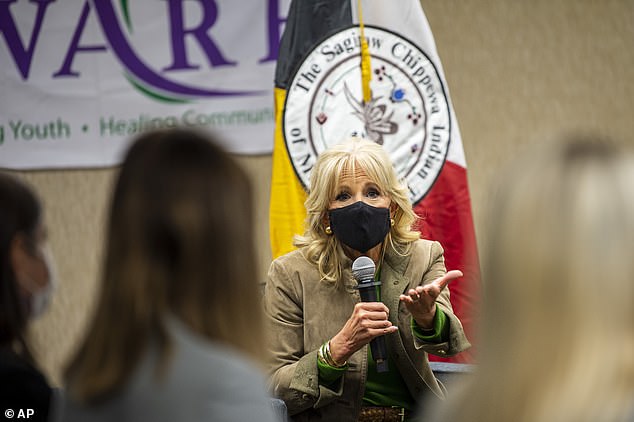 “I’m a teacher, so I look forward to what the kids have to say,” Dr Biden said in a brief opening remarks during the listening session on Sunday. 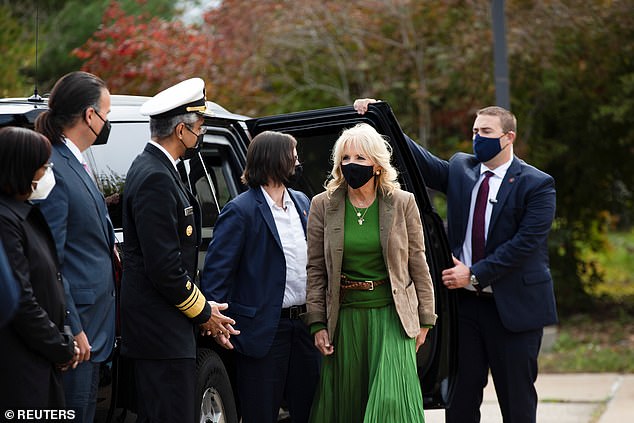 After the session, Jill goes to the annual Yeshiva Beth Yehudah dinner in Detroit where she made remarks

The president, according to a recent analysis, has now spent more time away from Washington early in his presidency than his three predecessors – choosing to spend the majority of his weekends in one of his two Delaware homes or at Camp David.

Including this weekend, Biden has taken 35 personal trips since his inauguration in January 2021 and has spent 108 of his first 276 days in office at his homes in Wilmington or Rehoboth or at the presidential retreat at Camp David in Frederick, Maryland. .

This means that a third of Biden’s time in office so far has been spent at one of those three locations.

Once down, Biden spent 69 days – or 23 visits – away from Washington at his Wilmington home; seven days at his waterfront home at Rehoboth Beach over two visits; and 32 days out of 10 different trips to Camp David.

Biden’s 108 days are compared to Trump’s 70 days, Obama’s 40 days, and Bush Jr.’s 84 days in their personal residences during their first 276 days in office.